My Life Changing Drive to Dixieland and What I Learned Part 1: VETERANS

My time driving in North Carolina and other southern states in 2016 was truly educational, historic......and somewhat emotional. I realized returning home that I wouldn't be able to describe the trip in a single article. I sincerely hope these articles reflect the absolutely spectacular hospitality I received, the terrific Southerners I encountered, and the effect the trip had on me.
The Prime Minister of Canada insulted a one legged Canadian Veteran during a live conversation last month, saying our Veterans are asking too much at this time. While I was horrified at the ignorance of the statement Trudeau made, I also realized what I wanted to portray to Canadians about what I learned from my experience in Dixieland. That one legged Canadian Veteran very much reminded me of a Confederate flag I bought in North Carolina from a one legged American Veteran. I was so taken by the experience I wrote about it upon returning home. The article "My Most Memorable Flag Purchase" was merely an example of the pride and respect that was commonly encountered in North Carolina towards/to their military and their Veterans. The gentleman I purchased the flag from simply liked my attitude from the short conversation we had, and in a stunning display of respect and honor stated such aloud before singing part of the Canadian national anthem. The strength of character, the attitude of respect and honor, and the proactive display of pride was unforgettable. I guess what I'd like to portray to the reader is.....that Veterans deserve the respect and thanks of the public to a very high degree. Veterans have immense pride in the country and cause they have served, given all they have and more.....the least we can do is thank them for whatever service they provided and show them the respect and honor that they deserve. You set politics and personal opinion aside to pay that respect....and the supposed leader of Canada has failed miserably to understand this. I'll share some details regarding my observations of Dixieland and Veterans in hope that my Prime Minister may learn from it and gain some better form of honor and respect towards those that serve(d) in our military. 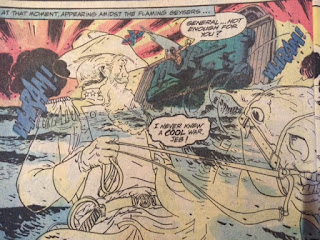 My earliest memories of education regarding the Confederate flag came from (believe it or not) reading comic books as a kid. All references of the flag were positive and indicative of it being a symbolic flag of battle. Within the "GI Combat" series was the story of southerners being watched over by the spirit of a dead Southern General from the Civil War (right). It was evident in the comics that the flag was flown in several wars after the Civil War with honorable intentions. Throughout the comics were examples that the flag was flown to inspire the best from people and the most honorable of actions from those at war. 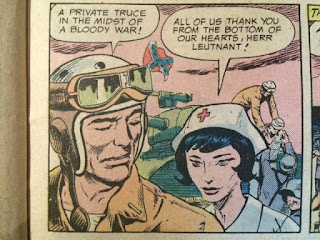 At times it was a tank crew of Southerners showing compassion and holding a temporary truce with the Germans when realizing the enemy was in need and not in any shape to fight (left). Several examples clearly pointed out that the Confederate flag was proudly flown with other flags. The impressions left from reading these stories very much suggested that Southerners fought hard for themselves, for ethics, and for others as well (below). 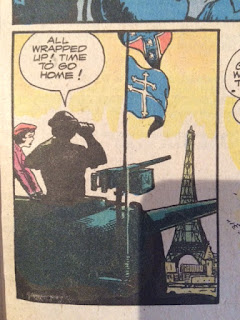 The notion that the Confederate flag flies for good and honorable intentions, and for Veterans and military, has long been forgotten in the filth of politics and shaming tactics over many decades. Sometimes it's something as simple as a child's comic book that can point out the most important of facts from a difficult and complex topic of such controversy (below) 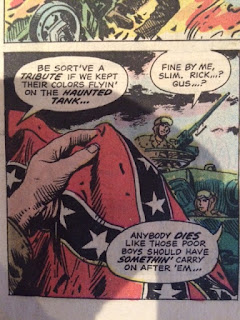 So how did the southern pride comic books from my childhood compare up to the experience I had in my historic drive to Dixieland?
After considering my first hand observations, I'd say that a great many Southerners (having had to rebuild the South for generations after the American Civil War) took the opportunity to serve their country through service in several wars. Military service was and is a way for Southerners to show their infamous pride for service, the legendary tenacity in battle; and perhaps to further themselves in life through serving their country. Military service is something entrenched within southern lineage and it was evident by the overwhelming amount of veterans I had the pleasure to meet while in North Carolina and surrounding states. I was as unprepared to buy a Confederate flag from a one legged Veteran as I was when he burst out singing the Canadian national anthem as a thank you. The experience and profound display of pride was truly inspirational to see firsthand. Prior to the Memorial Day NASCAR race there were extensive demonstrations, celebrations, and dedications honoring the American Military. The extensive show of pride for the military during the afternoon of events was something I'd never seen before. The obvious respect and considerable interaction from the public during all of the military involved events was admirable and warmed my heart to witness it. While we are proud in Canada and take pride in our military, we can indeed learn much from the pride Southerners have for their military.

Whether it was a Veteran out front of the race track selling flags or the dedications to their military before the NASCAR race, American's showing pride and respect for their military was an admirable attitude to witness. This was one big afternoon of the military showing pride, and the public literally cheering and showing their own pride for their military! While my intent was to take in a NASCAR race, I realized that what I was observing was a difference between American and Canadian society.
While I am accustomed to taking moments to honor our Canadian military and have thanked many a military member for their service, I saw a difference in how Southerners treat their military. The sincere sharing of pride between the public and military was inspiring to experience and showed me the differences between us and them. If Canada (as a country and all of it's people) took more pride in their military we wouldn't have a Veteran asking our Prime Minister for assistance at a public forum. We'd have proactively dealt with the issue and made sure that the Veteran felt heard. We'd also have a much better class of Prime Minister that wouldn't be so stupid to state Veterans are asking too much at this time. Canadians need to express much more pride in our military, and support the people that dedicate their lives to serving the public in the most unpleasant of tasks. 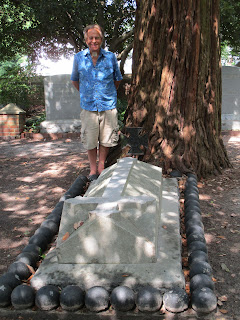 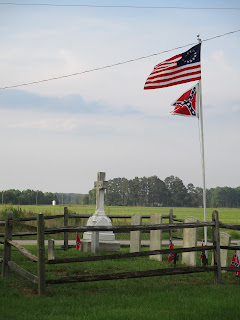 Above Left: The small private graveyard of the Seven Blackbirds, Edgecombe County NC.

Above Right: Cousin Brock Townsend (Southern gentleman, Veteran, and historic scholar) posing at grave of Major General William D. Pender in Tarboro, NC.
I met Veterans on my trip from every war dating back to WW2. I attended private historic graveyards, large public military graveyards, and small town museums. Everywhere I went I found extensive military history, and verification of the Confederate flag being a historic battle flag. The American Civil War was fought on many fronts and literally in every small town. While sad and unfortunate it meant you could have family fighting on both sides of the war, and at times it pitted friend against friend. 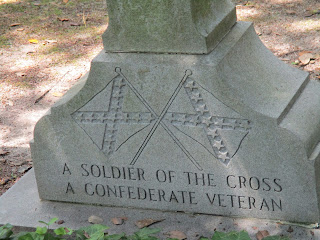 While the origins and intended purpose of the Confederate flag have been badly molested by filth politics and hate propaganda over the decades, it's historic and honorable intent still exists today. It is not only found in the many Civil War monuments and grave markers found throughout the south....I also found it VERY well represented in the hearts of the Southerners and Southern Veterans I met. I returned to Canada with more pride in my military and more apt to thank those that have served.
So how did my drive through Dixieland compare to my first education from a comic book as a kid? The Confederate flag is very much a historic battle flag and a symbol to fight hard for the highest of ethics and beliefs. It has indeed been raised in every war fought by Americans since the Civil War. It is a symbol that represents Southern Veterans and should be respected as such. To this day the great pride of the South shines through and within the American military and is a vast inspiration. Much can be learned from history if we pay attention to it and not molest nor destroy it.
The United States took a turn for the better in regards to the acknowledgement and support of their Veterans as a result of their last federal election. Even prior to Canada's last federal election we were not showing our military enough respect nor support....and then we took a turn for the worse. We now have an ignorant Liberal government and leader in power that has very little respect for our military, history, or heritage. Under a specific agenda of filth politics and attacking history to cause division, Canada now experiences the exact strategy that was used to attack and discredit the Confederate flag as a hate symbol. It is a very sad irony that while I speak in defense of the Confederate flag it's a time in Canada to raise it in alarm of what is occurring.
It was a pleasure recently when a friend announced his intent to enlist into Canadian military service. He is the third generation of his family to serve in the military, and through our extensive talks he knows my outlook and attitude. I was indeed honored when he asked me to attend his swearing in ceremony. He was unaware of my planned articles, but slightly suspicious when I wanted a few pics. :) 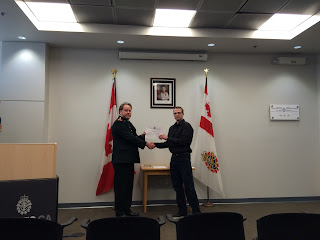 If ever you have the opportunity to attend the swearing in ceremony I highly recommend it. Our improved attitude towards our military is best adopted with actions and words. Verbalizing your pride and a visible showing of support is the best thanks an active military person or Veteran can ask from the public. I took the day off work to attend this ceremony, to which I was greatly thanked. I wholeheartedly thanked my friend for his dedication to serving his country. This is not shared to gloat or suggest I am any better than anyone else, but to hopefully bring forth a higher level of pride about our military in others.
While I'm sure that many Southerners will be disturbed by this confession, I must admit I stole something when I was there! This is the first of three articles to share the thing I stole from the United States. I lived decades of my life not understanding I too have rights to pride in my lineage and heritage, and in myself. Upon seeing it I became dreadfully selfish and you must understand....why I stole as much Southern pride as I could and toted it home! Yep! I smuggled it across the border and into Canada. I realize that this may have serious consequences like effecting NAFTA negotiations, and hope that the kindness of Southerners can forgive me for such blasphemy. ;)
Somewhat like a great Alabama song says, "I went into the heart of Dixie....and came home with Dixie in the heart of me".

Posted by southsasksoutherner at 9:41 AM

A former member of the shameful 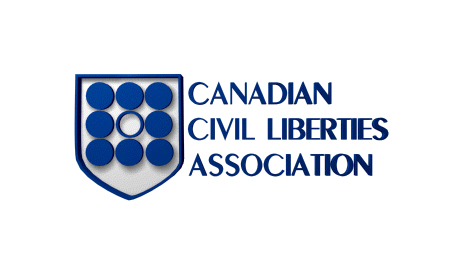